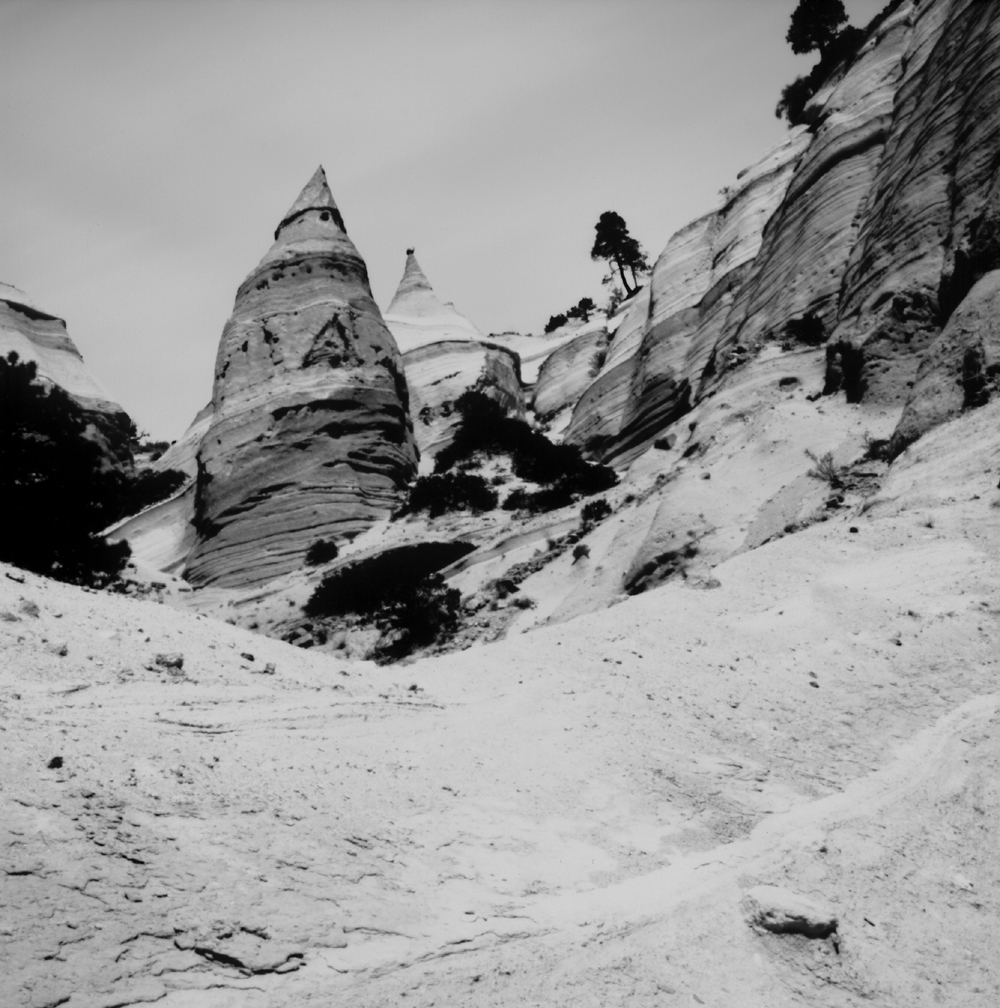 The last several articles have had us revisiting a day trip I made to Tent Rocks National Monument in north-central New Mexico, back in 1998, equipped with the 8"x8" falling plate pinhole camera loaded with paper negatives, and a large wooden tripod.

Because of the size and weight of the equipment, my agility was rather restricted, and thus I could only progress so far up the increasingly steep trail before I felt I had to turn back.

The image posted in the previous article shows the entrance to a narrow and winding slot canyon that, while spectacularly scenic, was so restricting that I could barely manage getting through without incurring damage to either box camera or tripod. In addition, because of the narrow passage I could not manage to find adequate footing for the large tripod, else I would have tried an exposure in the shaded gloom between high canyon walls; which would have required several minute's exposure time.

Then there was the matter that this is a public National Monument and there were other people on the trail that day, and attempting such a lengthy exposure, even if I could have managed it, would have meant either blocking their passage or them interfering with the camera gear. So even though I had wanted to try my hand at a pinhole image of the slot canyon, I knew I couldn't. It is personally disappointing when you can sense there is such a powerful subject matter almost within your grasp, but forces outside your control conspire to prevent success.

It was with this sense of temporary disappointment that I proceeded forward, yet remained hopeful that something fortunate might present itself up ahead. After more bends in the trail, as it climbed higher and higher, I suddenly came across this scene and knew immediately that this was what I'd been hoping for.

The trail widens as it makes a bend to the left, in a relatively open area that's a marked change from the confines of the slot canyon now behind us. Though the terrain is steep and sloped, there's plenty of room for fellow hikers to pass, while my tripod's legs can find adequate footing. The challenge will be managing to tilt the camera up toward the conical formations while keeping the tripod from toppling over. I use to advantage the upward sloping terrain on the far side of the trail, where I can adjust the legs' splay to tilt the camera up while the terrain's contour serves to stabilize the center of gravity.

Knowing that this scene was directly exposed to the bright sun, and very light in tone and thus more reflective than other, redder geologies, I opted to shorten the exposure time a bit, so as not to over-expose the landscape.

With exposure complete and film plate properly dropped into the camera's lower storage area, I contemplated continuing ahead, but could already see that the trail only gets narrower and steeper up ahead. I decided that this was a good way to end my day, with several hopeful images yet to develop once back home.

I've returned numerous times to Tent Rocks since then, and every time I do it is with the memory from this day that serves to remind me of the lessens learned, of perseverance and overcoming challenges, of not ceding one's hopes to temporary disappointment but always looking further up the trail for more opportunity.
Posted by Joe V at 8:43 PM