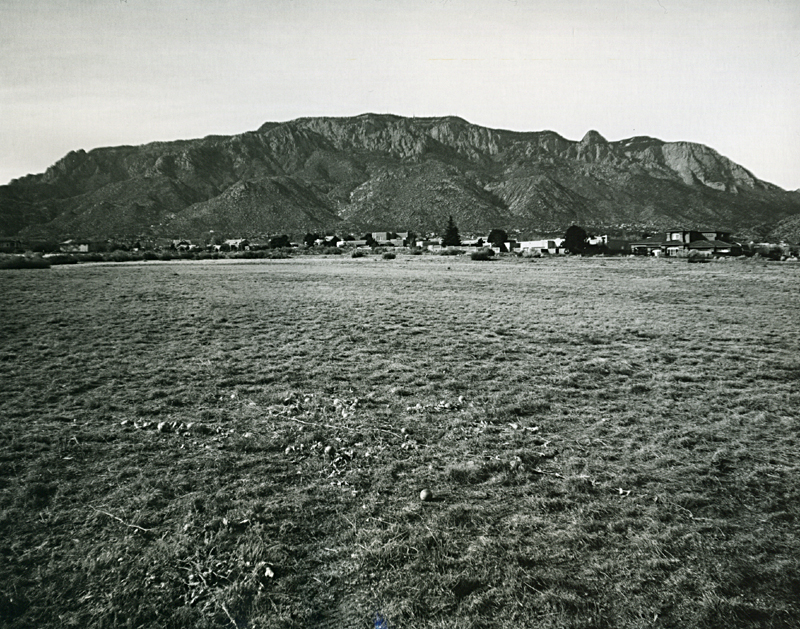 Though most of the handmade cameras I've fashioned have been of the pinhole variety, years ago I began experimenting with what could be termed "improvised optics," at first using the objective lens from a 7x50 binocular, which projected an image circle big enough to cover a 5" x 7" film format, though I usually employed it in my 4" x 5" Speed Graphic camera - mainly because of the convenience offered by the camera's curtain shutter.

Eventually, the time came when I wanted to try my hand at building an 8" x 10" camera, mainly because of my preference for working with paper negatives, which can easily be contact printed to good effect, and wanting to work in larger sized images, encouraged by the low cost of large format photo paper as compared to sheet film.

But I was never attracted to the ability of a large format bellows camera to twist itself, pretzel-like, into all kinds of contortions, as is the tradition of architectural and product photography where geometry correction or manipulating the plane of focus might be important. I'm more of a documentary photographer in the tradition of the 19th century forefathers, and thus a simple box camera was more to my liking, but one that could be easily focused. 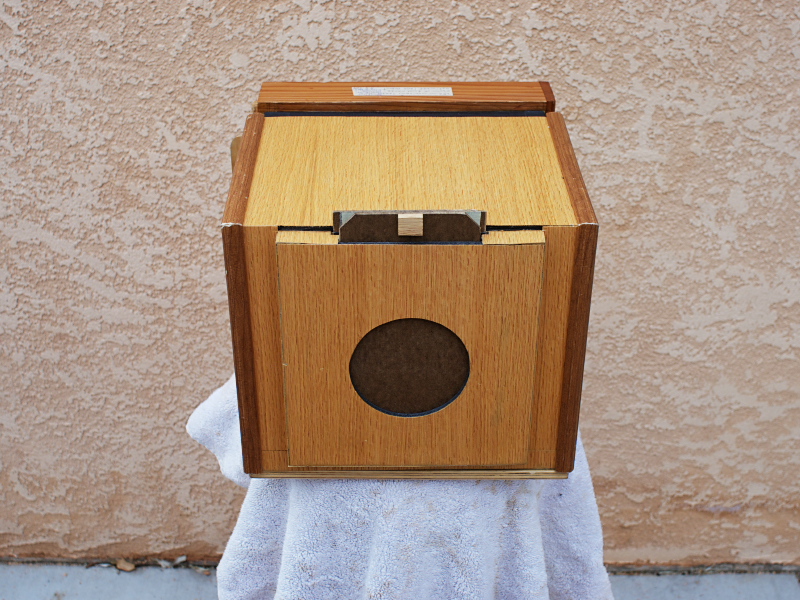 And thus I came up with the notion of a nested box tailboard camera, so-called because of the rear half of the camera that slides in and out of the front half for focusing, resting upon a baseplate for support. I had been inspired by images of historic cameras seen at the George Eastman House online museum, and figured I could cobble together something functional, if not visually appealing. 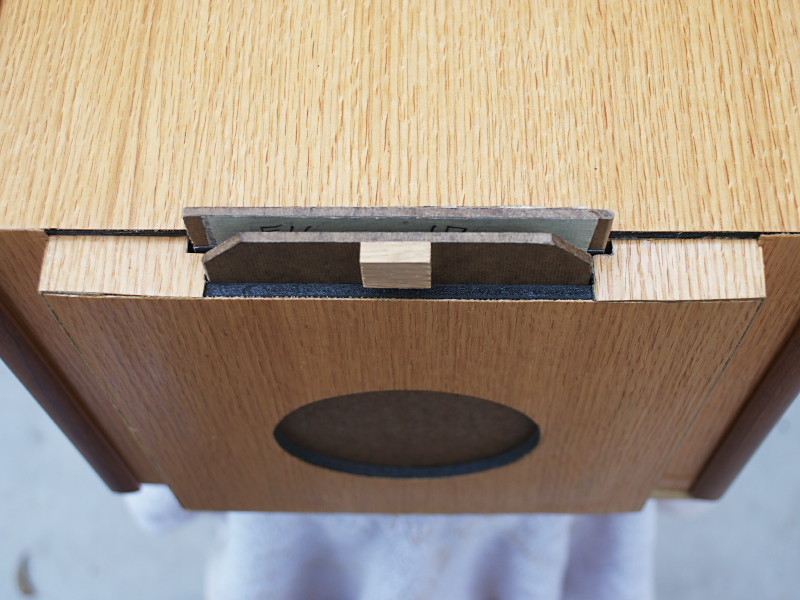 So I found a sturdy, flat wooden board as the basis for the camera, and built upon it a foam core front box structure, that houses the shutter slot and aperture plates. The foam core board surfaces are covered with thin countertop laminate that provides a faux wood-like appearance, while the edges are reinforced by wood-printed foam trim molding. 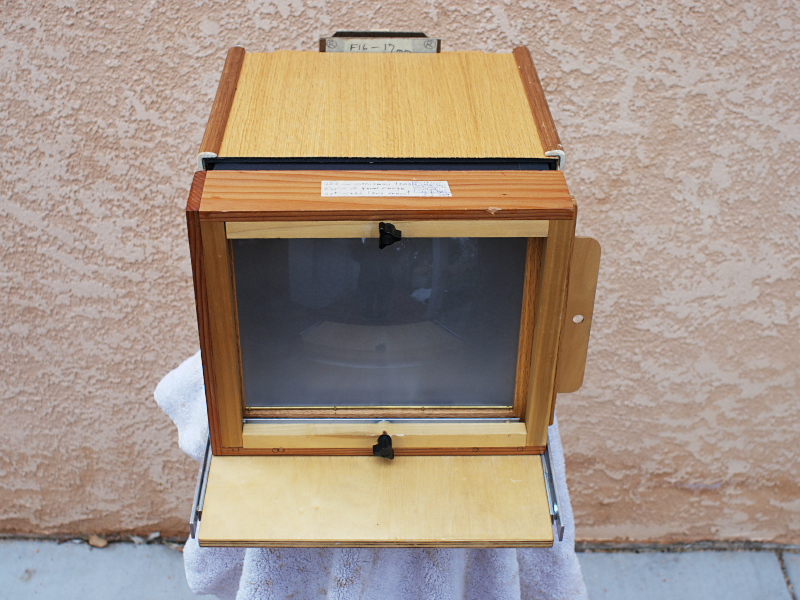 The rear, sliding half of the box is built around a frame made from scrap wood that provides a slot to insert a film holder or view screen frame, which is attached to the rear of the foam core box that slides snuggly in and out of the front half. What provides the light-tight seal between front and rear halves of the box is due to the interior of the camera being flocked with adhesive black craft felt, and that light leaking inward through the gap between box halves has to travel up to the front of the box, then reflect back toward the film plane, in order to fog the film. This is due to the rear half sliding inside the front half; had it been built the other way around, light could easily leak in between box halves and directly hit the edges of the film holder.

Though the camera initially lacked a mechanical shutter, I figured with the slowness of paper negatives and a small enough aperture stop, exposure times could be long enough (>=1 second) as to be accurately timed by hand with a simple guillotine-style shutter.

The length of the camera was initially designed around a meniscus lens salvaged from an industrial semiconductor stepper machine (think of it as a reverse enlarger: a reducer; and made by Nikon), that was mounted to the inside of the front of the box via a bracket and bolts that made it easy to remove and replace with other lenses. 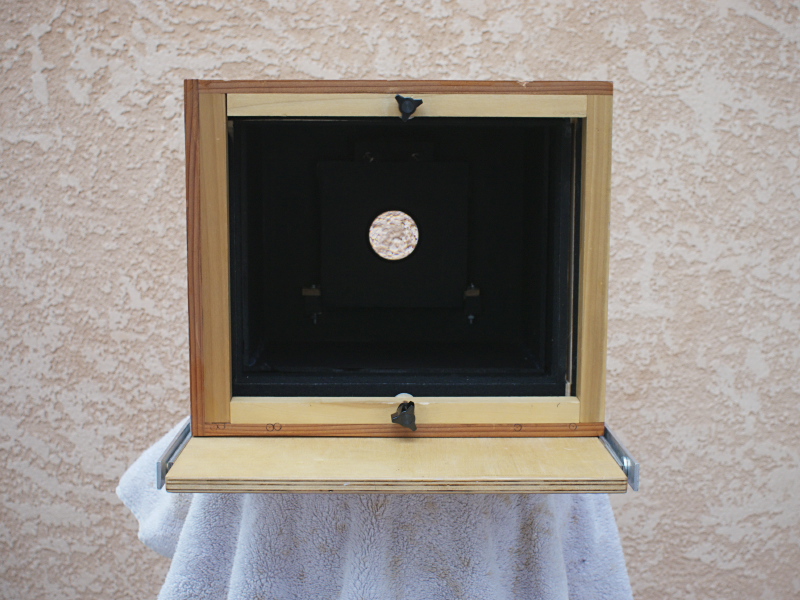 The opening in the front of the box provides for a clear aperture of 2 inches, but meniscus optics are rarely very sharp operated that wide, and so to aid in focusing I made an aperture plate stopped down to 17mm, which clears up the view of these single-element lenses sufficiently to enable a distinctly clear image while still being adequately bright. Unless sunlight is directly striking the view screen, I can often make out a distinct image without the aid of a dark cloth. 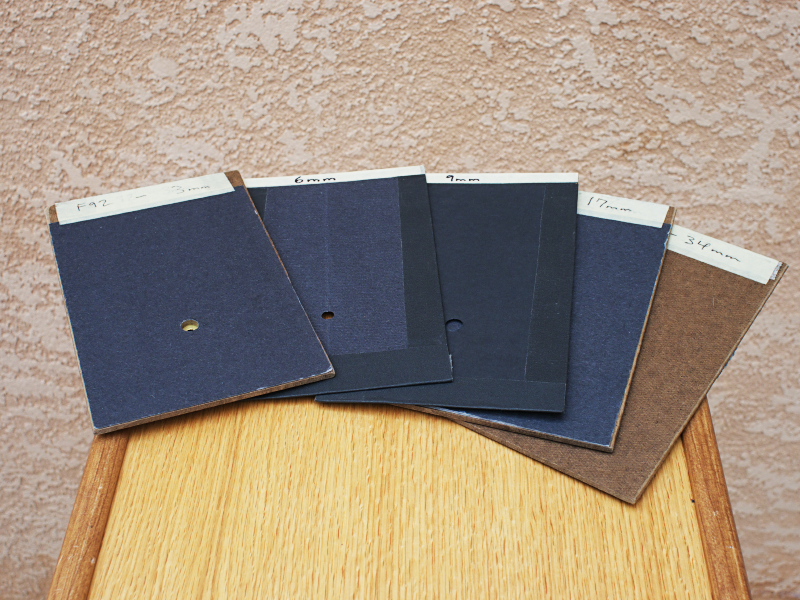 I also made a number of other aperture plates, the smallest being 3mm, that cuts the light down sufficiently to permit hand-timed exposures in bright sunlight. Some of these plates are cut from masonite board, while others are fashioned from sturdy black craft paper. In the case of these latter plates, their edges are reinforced with black gaffers tape and when inserted into the camera the excess slop in the aperture slot is filled in with a masonite spacer. 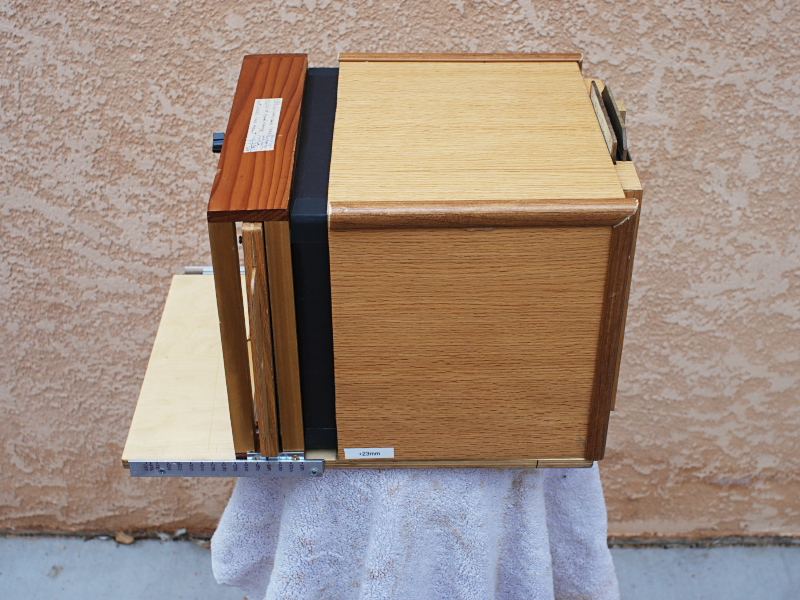 I had fashioned a focal length scale along the lower right edge of the camera, initially calibrated for this first meniscus lens, that enables the camera's working aperture to easily be determined, by dividing focal length by aperture diameter. This method automatically compensates for any "bellows extension factor" caused by close-focusing. Additional lenses are used with an offset number that's added to or subtracted from the scale reading, depending on the lens.

I did experiment with the 7x50 binocular lens, mentioned earlier, that actually makes a very nice 8" x 10" image, with just a bit of vignetting, but its focal length (150mm) is too short, and the box halves too long, to permit that lens to be focused at infinity. However, with the box halves pushed together as close as they will go, that lens operates as a close-up lens for tabletop dioramas and still-life scenes. 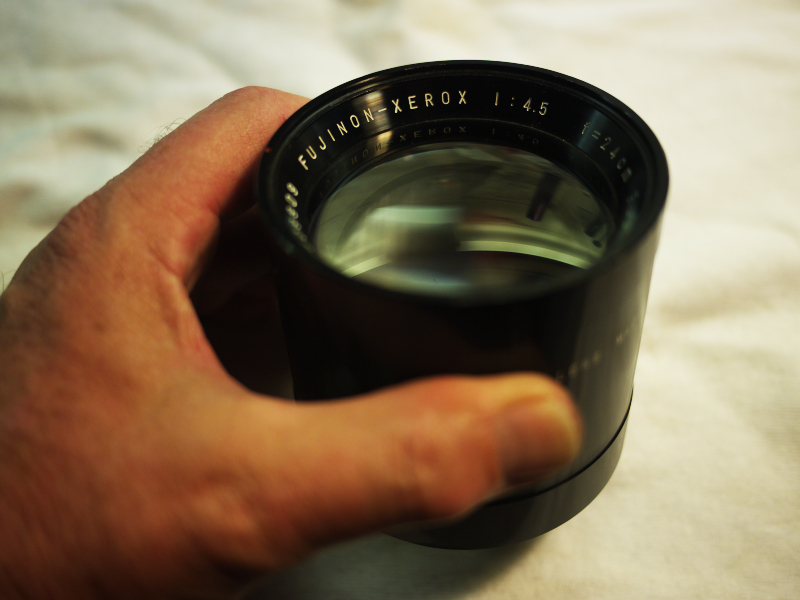 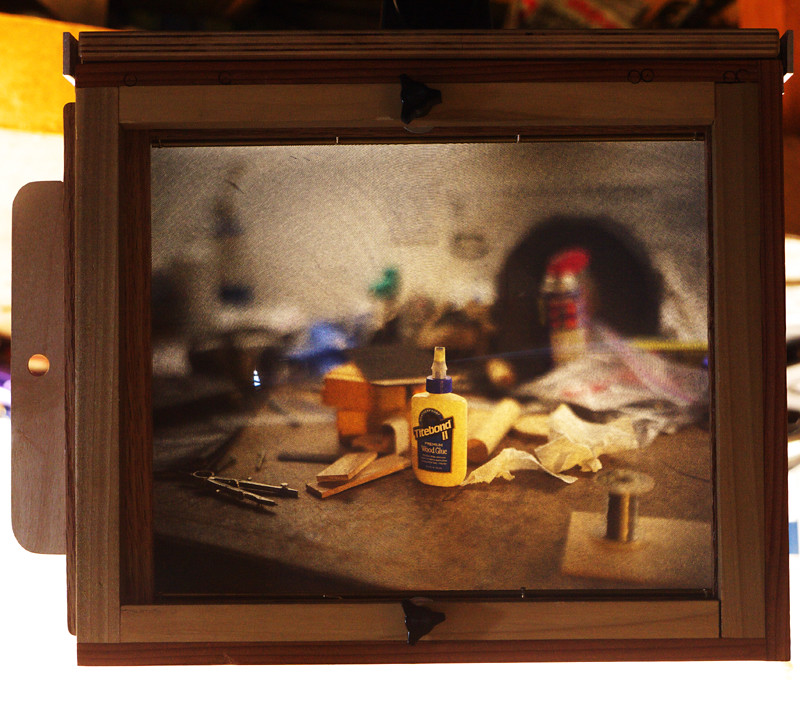 Another lens I acquired with the intention of using in this camera was a multi-element lens cell from a Xerox copy machine; however, such optical designs cannot be used with external aperture stops without severe vignetting, which I only discovered after purchase of the lens. Yes, it does operate nicely wide open, but the resulting image is too bright for an exposure to be made with a hand-time guillotine shutter. That lens was later repurposed in my Speed Graphic (since it has its own focal plane shutter), using a special bracket I constructed for the heavy lens, which reminds me somewhat of a Kodak Aero Ektar. 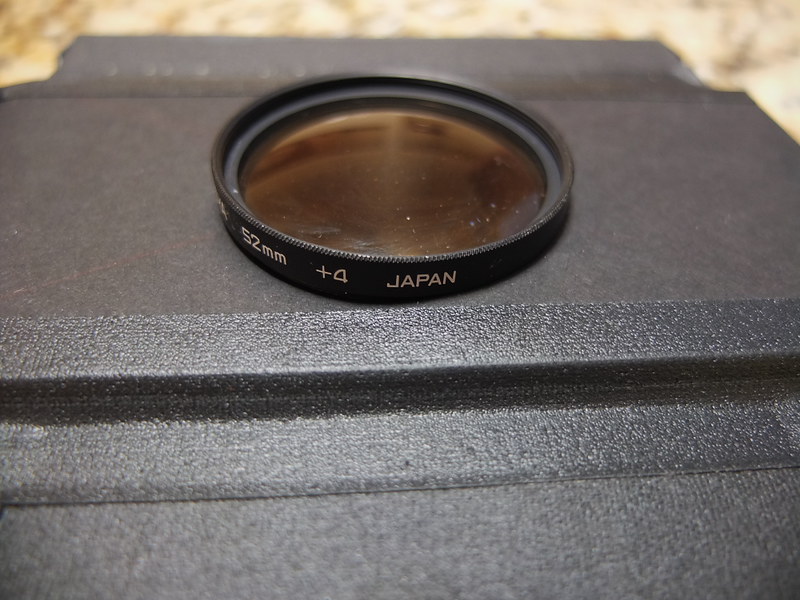 So, I used this camera, on and off, during the last few years with the single element meniscus lens, but wasn't entirely satisfied with the image quality. Then last year I was given a close-up lens, intended to be threaded over the front of a 35mm SLR lens, and found its 275mm focal length and optical quality to be ideal for this camera. This has now been the standard lens I use, of pretty good quality when stopped down, as was done with the top image, taken in far northeast Albuquerque near the Sandia Mountains, exposed onto Harman Direct Positive Paper (which is why the image appears reversed, for those of you familiar with this terrain). 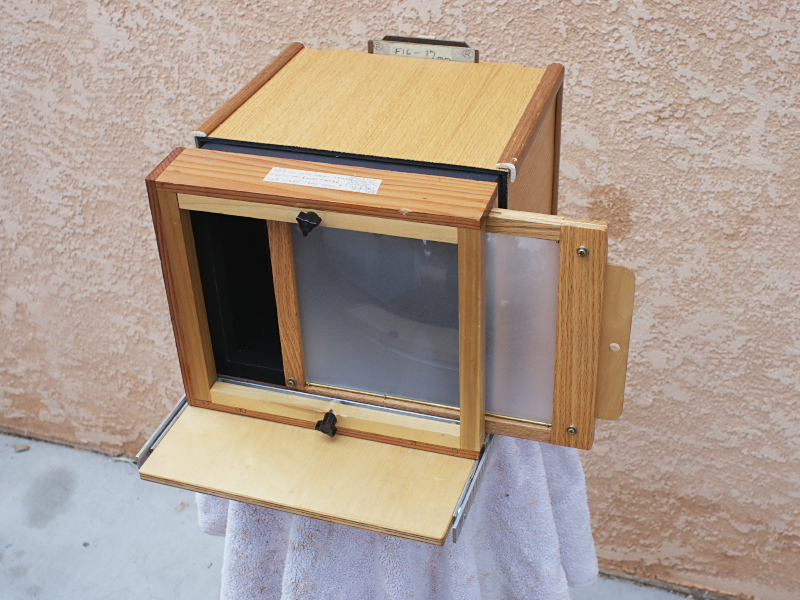 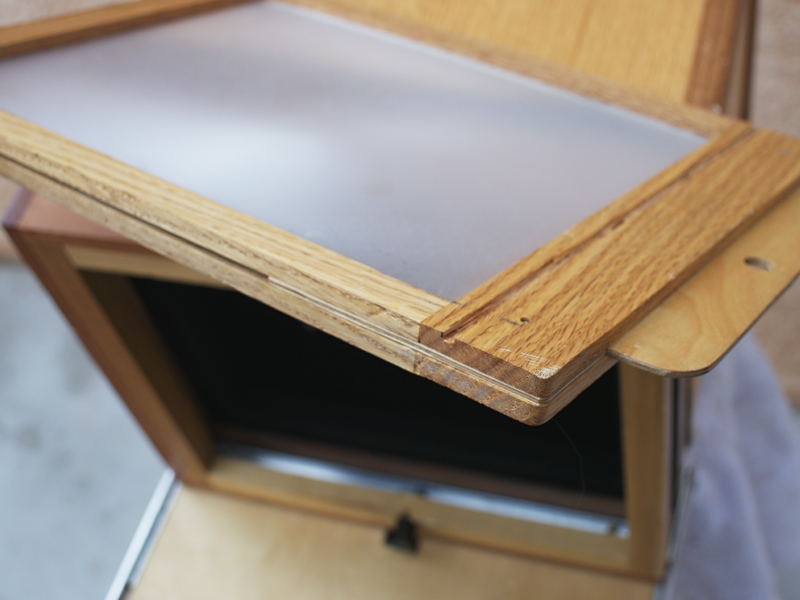 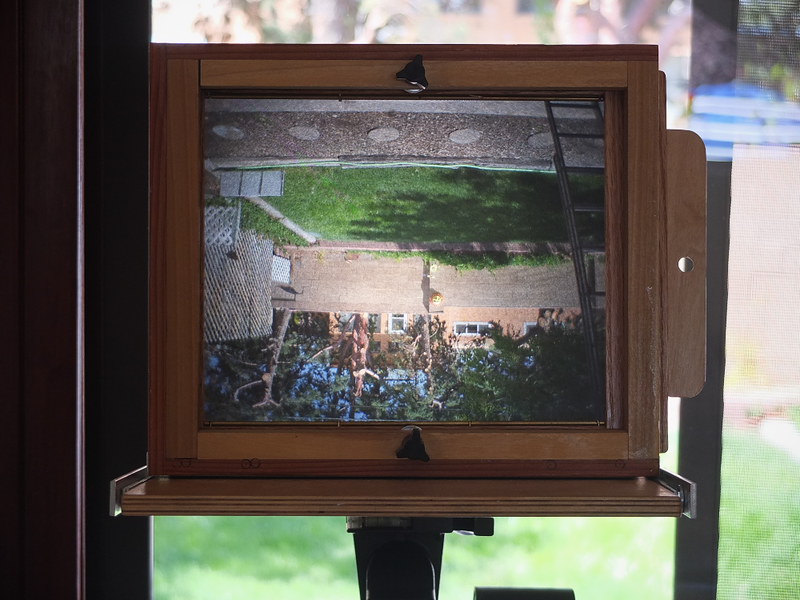 I would be remiss not to describe the view screen itself. Rather than employ a built-in view screen with spring hinges, as is the case with conventional large format cameras, I built a laminated wooden frame that slides into the side of the camera, just like a sheet film holder. The viewing screen is a plastic fresnel magnifier, purchased from a local office supply store, whose smooth side (facing toward the lens) was sanded down with 600 grit emory using a random orbital sander, offering a surface of sufficient quality for composing an image, while the rear fresnel ridges help to focus the image direct rearward, making for a brighter image.

The camera is not nearly as heavy as it looks, due to its construction of layered foam core and countertop laminate, but the biggest challenge in carrying it in the field is its bulk. I've rigged up a makeshift camera strap to help carry its weight, which has helped. 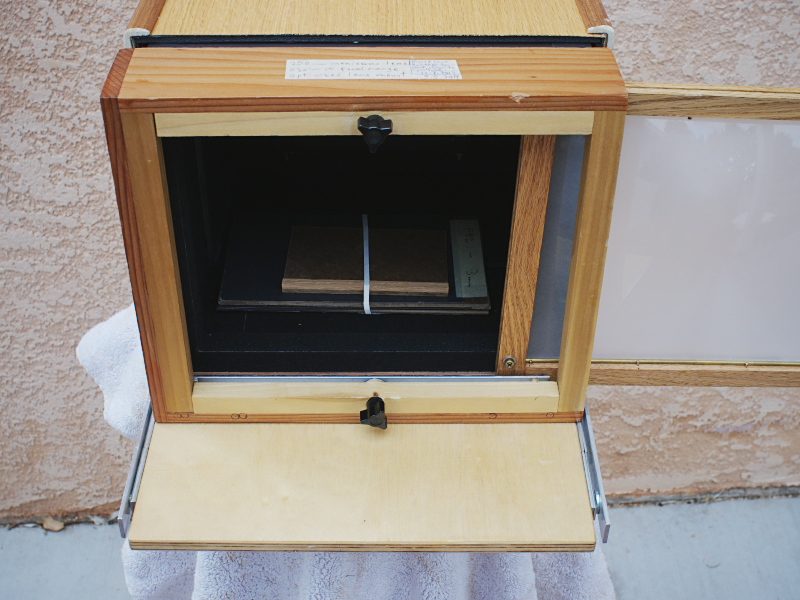 I like that the interior of the camera serves as a storage compartment for spare aperture plates, and that it's rather weather resistant. There are times when I dream of building another version, a bit shorter, enabling me to use that binocular lens, but I have not yet done so. This camera has served as a real workhorse for experimenting with adapted optics as makeshift camera lenses, and is a real hoot to use. 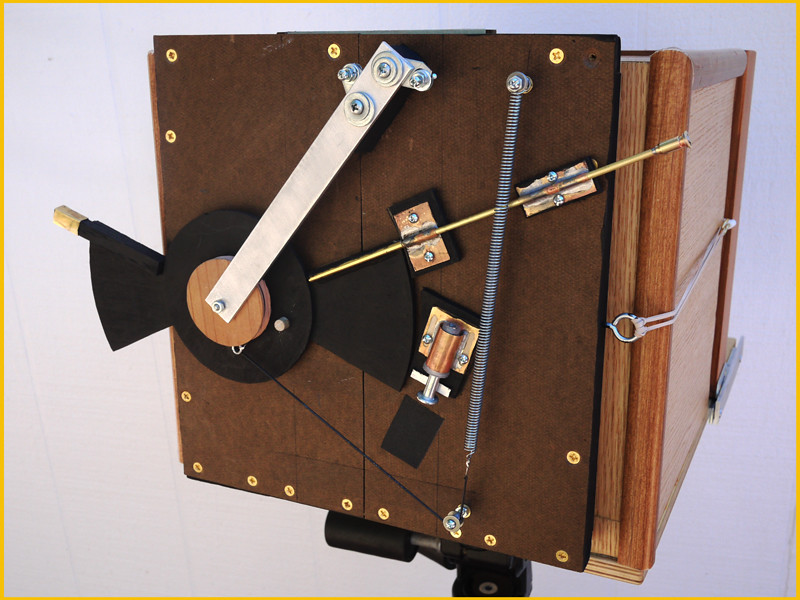 One feature I have not mentioned is that I eventually made my own mechanical shutter, that fits over the front of the box, but that's a subject for another day.
Posted by Joe V at 7:14 PM