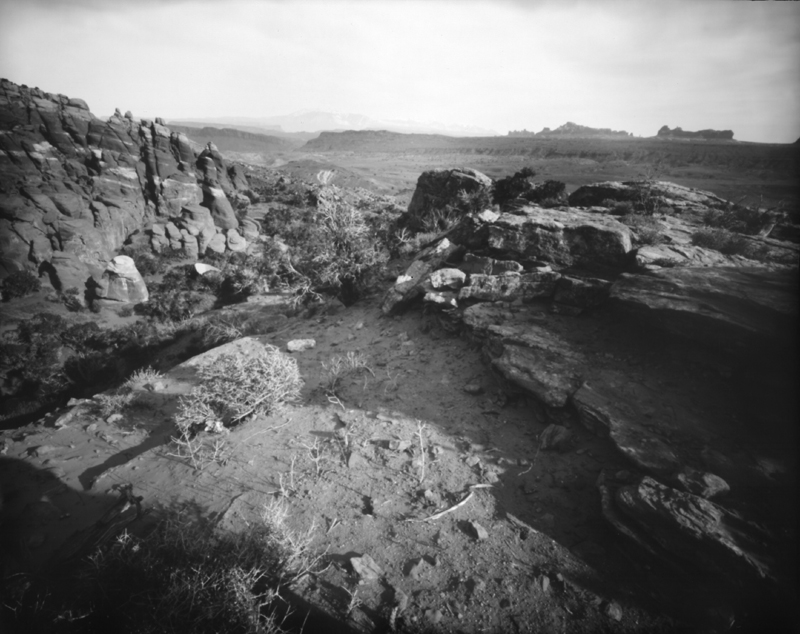 It was almost five years ago when we made this visit to Arches National Park in eastern Utah. It was early April, a time when we typically go on some short, regional vacation in celebration of our anniversary, but that can often present unpredictable weather, especially in the higher regions of the American west.

The drive from Albuquerque brings us through the desolate northwest quadrant of the state along highway 550 to Bloomfield, then through Farmington and over to Shiprock, then up the highway to Cortez, where we pass through the very southwest corner of Colorado, through Dove Creek and on into Utah, making a turn northward at Monticello and up to Moab. 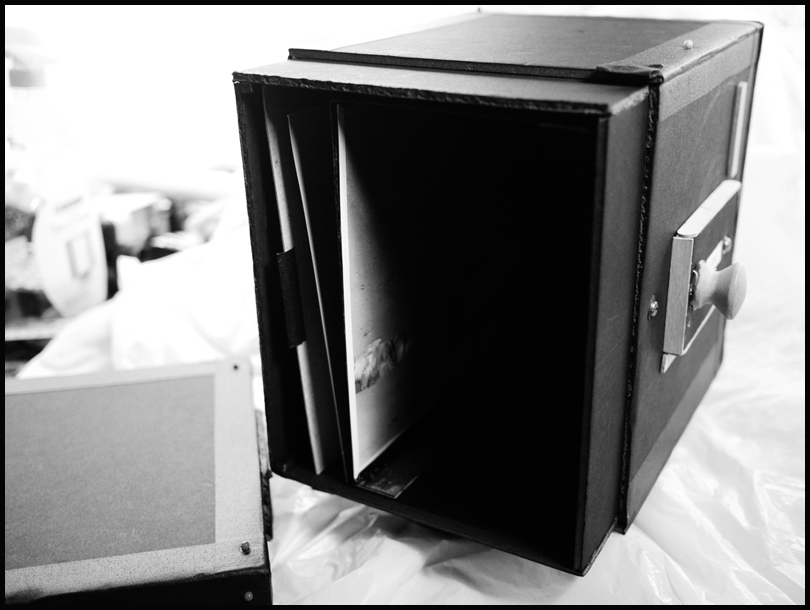 I had been experimenting with a newly built pinhole camera, made from black foamcore board and gaffer's tape, and mounted to a thick slab of wood, providing for a sturdy base, tripod socket and low center of gravity. The principal feature of this camera was once again, like the falling plate cameras of before, an attempt to answer the question of how to make multiple exposures while out in the field, far from home and the convenience of one's darkroom. In the case of this new camera, it employs a side-opening lid gaining access to the camera chamber proper, with a storage compartment behind for exposed and unexposed paper negatives.

Like the falling plate cameras I'd previously built, one has to pause between exposures to change negatives. But whereas before it was a simple matter of tilting the camera forward and releasing the front-most film plate, this camera requires one to find a place to sit down, so as to form a lap upon which to set out one's changing bag, into which the camera is zipped up; then the side door is removed, the exposed paper removed from the film plane and stored in its compartment, after which a fresh sheet is loaded up and the door reinstalled.

There are downsides to this new camera's film changing process. It's slower to recycle between exposures, especially out in the boonies where there might not be a convenient place to sit down. I've been known to crouch down with my back against a boulder, tree or fence post, so as to form that needed table-like lap surface upon which to deploy the changing bag. There's the time required to take off backpack, remove changing bag, sit down, place camera into bag, zip up both closures, insert arms, fiddle with the camera, remove arms, unzip camera, restow changing bag and don backpack once again; then it's off to another spot with tripod over one shoulder and box camera under the other.

The advantages of this new camera, that in many ways outweigh the disadvantages, are several-fold. First, the storage slots in the back of the camera are each wide enough to hold upwards of 100 sheets of paper. That's enough paper for several weeks'-worth of shooting, without ever having to reload film holders in one's car or hotel room; perfect for extended vacations. Second, the camera doesn't have to be lugged around with sheet film holders; four such 8-by-10 holders (permitting only 8 images) are as heavy as the entire camera. Third, unlike the alternatives of a falling plate camera or sheet film holders, virtually unlimited numbers of images can be made out afield in remote areas without running out of film. Fourth, this camera is much less sensitive to be jostled and handled afield, unlike the more delicate falling plate camera designs.

The introductory article to this blog included an image made using this camera atop Delicate Arch. As I recall, I employed the services of my wife to carry the tripod, as we hiked up the long slick-rock mountain slope to the arch. While I carried the backpack on my shoulders and box camera under one arm, this gave us each a free hand in case we slipped or stumbled during out trek upward. I stopped repeatedly to load the camera, make an exposure and reload, all the while fellow hikers would either pass us in silence or pause briefly to inquire if that's a homemade pinhole box camera (I've always been amused by such questions, considering how crude the construction can appear). I found the sloping rock cliffs along the trail a convenient place to sit against to reload the camera, and again did so repeatedly during our time atop the mountain. 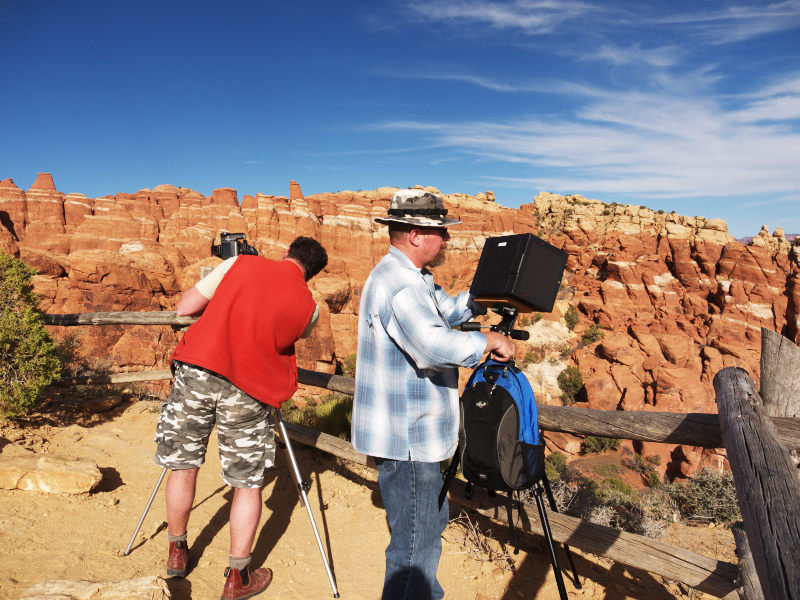 The layout of Arches makes it convenient to drive the paved loop road from one hiking site to another. The top photo was created at the Fiery Furnace overlook. I remember it well, because the overlook was crowded with a group of photographers engaged in a workshop, each employing high-end medium-format digital cameras (I'm talking cameras each as expensive as the Subaru we were driving), all of whom were trying, I'm assuming, to find some unique photographic opportunity whilst standing virtually side-by-side, with the same cameras and lenses. Myself, I must admit that I took on an air of smugness, as I shouldered my way up to the railing, deployed Bogen tripod and proceeded to carefully aim the obviously crude camera by means of the viewing dots affixed to the sides and top of the box (and a surprisingly accurate method of framing one's image), me in my grungy work shirt and sweat-crusted boonie hat.

By the time this image was made, I'd been well practiced in the art of pre-flashing paper negatives, a technique that yields a better dynamic range, especially in the shadows, than otherwise. You might want to contrast the tonal rendition of this image with those of the previous several articles, which were made a decade prior and without the pre-flashing technique. I'll cover the details of pre-flashing in another article.

This camera represents a significant evolutionary step in my camera designs, that of large-format boxes simple in design and light in weight (by means of foam core and gaffer's tape construction) yet rigid and stable (due to the heavy wooden base), offering extended operation in remote areas by means of the storage compartment behind the film plane. It's main downside is the need to remove box from tripod between every shot, find a place to sit, and utilize a changing bag. A further evolution, which I've yet to employ, is a camera with its own light-tight, black fabric arm sleeve permanently attached, enabling camera to be reloaded whilst atop its own tripod. One of these days...
Posted by Joe V at 2:15 PM