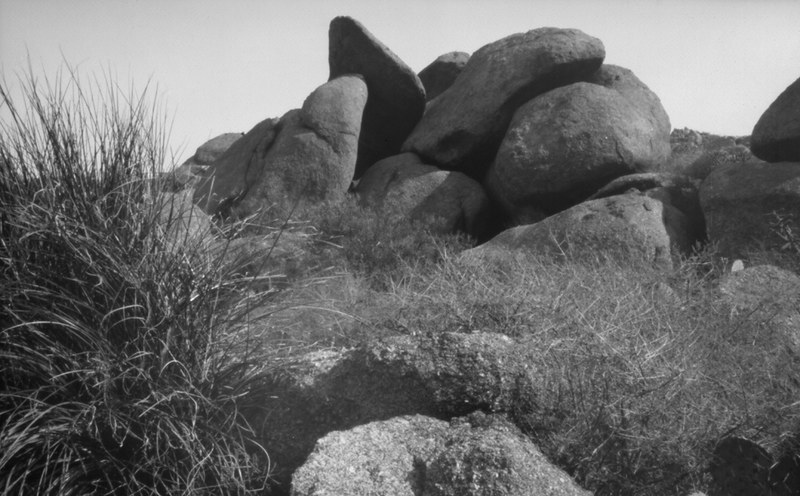 Albuquerque is a city that abuts the Sandia Mountain range on its eastern edge, along whose foothills are numerous opportunities for hiking, supported by convenient parking areas maintained by the City. This destination represents an opportune subject matter, when the desire to go out-and-about with a pinhole camera suddenly hits, as it did on this day, back in November of 2004.

I grew up in the eastern part of the city, literally in the shadow of the Sandia Mountains. Like many of my peers, we were used to telling directions by the massive presence of the mountain to our east, a lodestone of sorts, directing our inner compasses. Put me in some other town or city absent such a striking landmark and I'd be lost to tell which direction is which. But not in Albuquerque.

Long before I was born, my dad as a young man would hike many miles, from what is now downtown, up through the east mesa to the mountains, often accompanied by his buddies - back when the Great Depression offered little else for young men to do. One story he told was when he and his buddies each brought with them a .22 rifle with which, inspired by the cowboy movies, they had a regular shoot-out, hiding behind these massive granite boulders, ricocheting bullets zinging past their heads. One can't imagine doing such a thing today, it would be considered sheer madness, or downright criminal activity. Back then, it was just clean fun for kids living in a tough world; which activities might also have prepared them to face the trials of the Second World War, just a few short years ahead.

I thought about this story as I hiked the trails meandering around these massive boulders, preparing to do a bit of shooting of a different kind. I had with me the F/300 aluminum 5"x8" falling plate pinhole box camera and tripod, while I was by now also experimenting with paper negatives instead of the orthographic litho film I had been using, and which I was finding difficult to control its contrast.

I had already noticed that conventional multi-grade photo paper could also too easily produce images of excessively high contrast, caused by the blue and UV-intensive daylight activating the paper's high-contrast emulsion. For this reason I had begun experimenting with using RC photo paper of a fixed contrast grade instead, whose contrast was insensitive to the color of light; along with adding a faint, even exposure to the paper in the darkroom ahead of time - what I call a "pre-flash" - which serves to increase the paper's shadow detail without significantly increasing the highlight exposure, thereby serving to limit the excessive image contrast. This particular image was created during that period of intense experimentation.

I can't recall now whether the camera was mounted atop my homemade tripod or the heavier but more flexible Bogen; but I do know that, by judging from the foliage along the left side, the wind must have been very calm that morning, since this was a 45 second exposure. This was but one of a series that I've shot since in this same general area, and no doubt you'll be seeing more of these foothills images herein.

Having such an easy to access locale (about two miles from my house) for experimental scenic photography has proven to be of immense help in ironing out the bugs in my process before embarking on lengthier excursions afield. But even so, I periodically return to the Sandia Foothills, that ever-present lodestone that grounds me to home.
Posted by Joe V at 11:08 PM