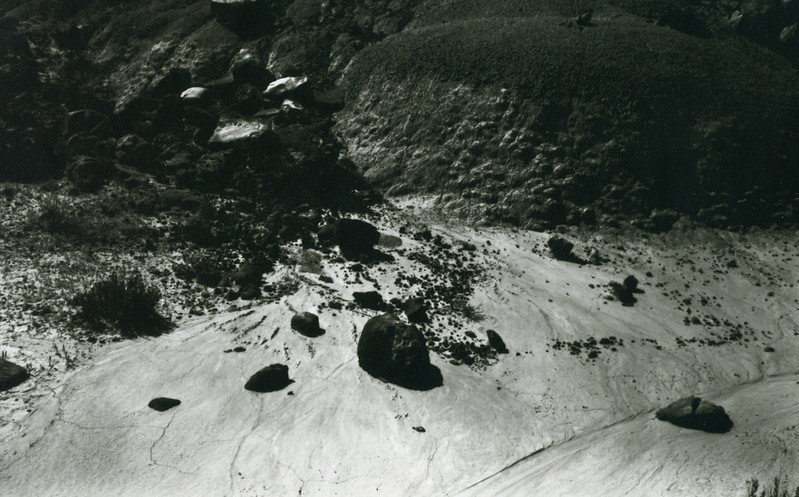 I'm standing in the hot, dry wasteland of the Ojito Wilderness, the sun blindingly bright reflecting off the hard-packed talus. I come here regularly, as it represents a relatively easy-to-access scenic area from nearby Albuquerque, from where I drive north 20 miles to the town of Bernalillo, then on US550 northwest another 20 miles, then onto Cabezon Road, bare dirt and sometimes barely passable, another 5 or 10. The Ojito is BLM (U.S. Bureau of Land Management) managed land, meaning that it's public access. Cabezon road winds west through the Ojito, where it meets the main electrical power transmission and gas lines from the Four Corners area of the State that feed Albuquerque.

There's a particular spot I park at, directly adjacent to Cabezon Road, that doesn't involve getting into loose sand or otherwise risk getting stuck. From there it's a short hike to a scenic area with otherworldy rock formations, that seem to morph and change over the seasons of wind, snow and rain, as if the terrain were some slow-motion monster whose presence one must always heed. Nearby my truck is a shallow trench being eroded away by snow and rain just slightly below ground, as I carefully place my footing, not wanting to fall through into some earthbound abyss.

On this day I had the F/300, 5"x8" format falling plate pinhole camera, and the formations of interest were this textured hill and foreground with volcanic-like rocks littering a bright, parched surface. The camera would need to point down to get the composition I wanted.

I used the viewing dots on the sides and top of the box camera to frame the shot, adjusting the tripod as required, then metered the scene using reflective metering with my Gossen Luna-Pro F. Once my exposure was determined, I waited for the breeze to subside before opening the shutter - there's always some air stirring about in this climate.

I finished the batch of film that had been pre-loaded into the camera on other compositions, which involved some tricky hiking down steep slopes of soft sand or talus, but this image I had high hopes to be the best from that day; and I wasn't disappointed. I returned to civilization excited at the prospect of what I had recorded, but also knowing there would be yet another day's opportunity in the Ojito Wilderness.

Technically, I was satisfied to have captured a pretty decent tonal range, getting both dark shadow detail and the tricky highlight of the desert floor.

Yet, there's something otherworldly about this image, as if it could have been from some NASA Mars probe instead of the American southwest. Which serves as reminder that we do live on a planet, Spaceship Earth, orbiting the same star as does Mars; and that this is just as much science as art; the photons of light that struck the crystals of silver halides in this film had their eight minutes of freedom through interplanetary space, then passed uninterrupted through the tiny pinhole aperture, until their flight was ended herein; this being a mere record of the event.