Down by the Rio Grande 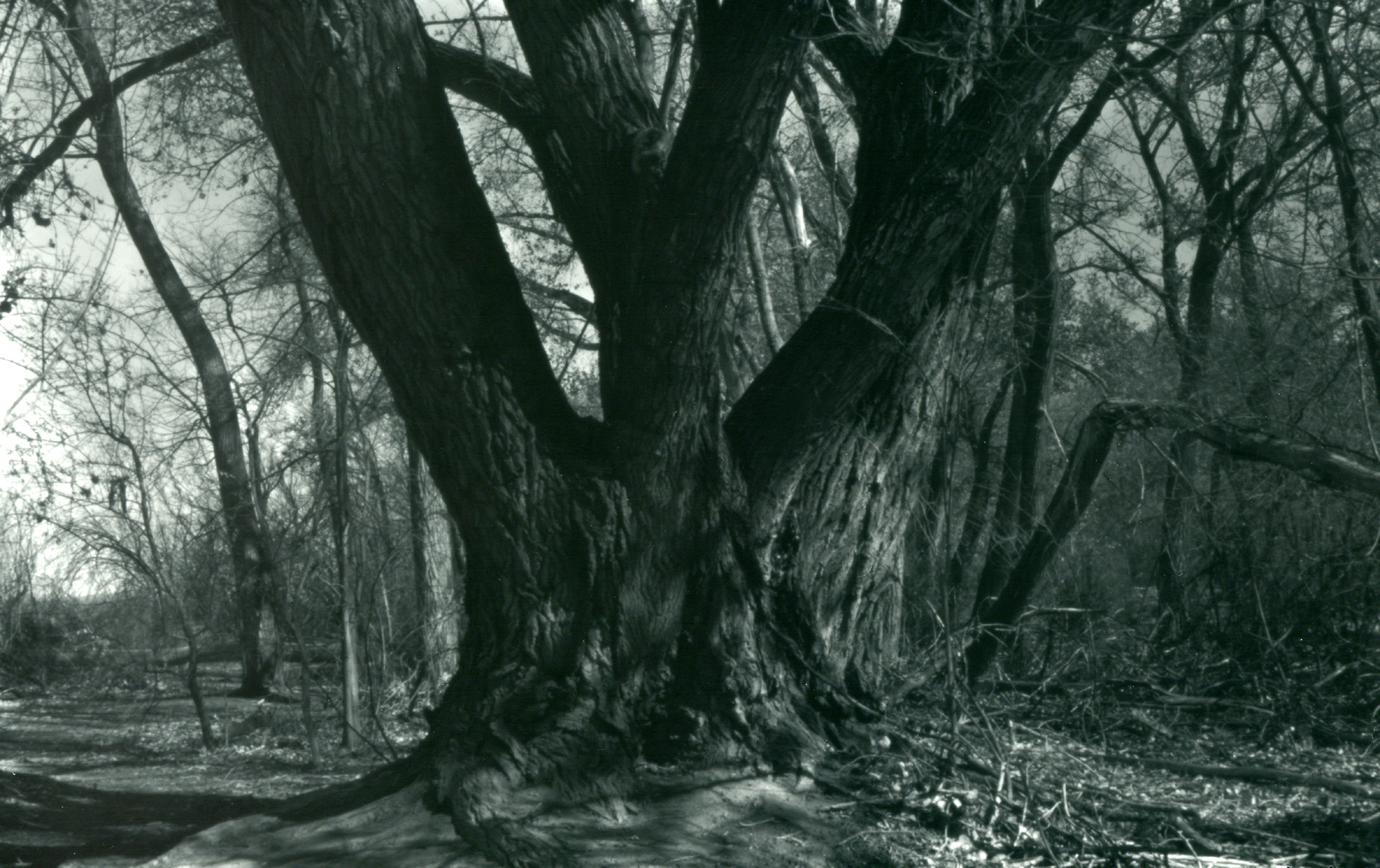 When in Rome, do as the Romans. And if in NYC, it would be Central Park, no doubt. But this isn't Rome or New York; and so when in Albuquerque, do as the locals - which means either a hike along the foothills of the Sandias, along the eastern boundary of the city, or a walk along the bosque river forest, where the Rio Grande threads its way through the heart of the valley and the more historic parts of town.

This image was created circa 2004, during a period of time right after I had finished the F/300, 5"x8" format, falling plate pinhole box camera (featured in the previous article), and it had yet to be upgraded with the heavier articulating plywood base, meaning that its sharpest images could only be possible in calm weather devoid of wind, that would otherwise vibrate the box enough to degrade the image as it sat atop its tripod.

During this time I was also experimenting with Freestyle Photo's Arista 200 orthochromatic film, which was less contrasty, and with a bit thicker (and hence more durable) base, than their APHS graphic arts film that I'd already been using. But I only used this film for a short period of time, before engaging in a lengthy period of experimentation with paper negatives, that has since been my primary box camera media of choice. I probably have the remaining pack of Arista 200 film still in my film storage cabinet; perhaps I should give it a try once again.

For me, the problem with using large format film, besides the cost, was that, in order to realize a usable image, I'd have to contact print it after developing and drying; whereas with paper negatives (and one of the prime reasons I've stuck with them since) is that they can much more easily be scanned and converted into a positive image, to be conveniently shared online; which harmonized well with the online photographic community that I was a part of at the time, on F295. This brings up the point that I haven't been printing many of these images onto silver paper in the darkroom; the paper negatives have thus represented a convenient intermediary for going from pinhole camera to digital image.

But this image is a scan of a contact print; I've chosen to retain the color tones picked up by the scanning software, rather than converting to strict monochrome, hence the cyan-like hue; which I rather like.

To get down to the forest along the Rio Grande, one parks along a residential neighborhood and walks a few blocks in, with backpack, tripod and box camera in tow. I like to carry these large boxes already mounted atop the tripod, making for a quicker setup if and when a potential image presents itself.

Instead of peering into a ground-glass view screen under a dark cloth, as is the case with the conventional large format photographer, with this camera one frames the scene by sighting along the viewing dots, mounted to the sides and top of the box, deciding where the left- and right-hand limits of the image will be located, as well as where to place the top and bottom edges. In this image, I wanted a bit of the old cottonwood tree's root system to be visible near the bottom edge.

I was pleased to get a decent amount of shadow detail on the tree, more so than what I was getting with the higher-contrast APHS lithographic film I had previously been using; no doubt aided by using HC-110 film developer instead of the paper developer used with the litho film. As for the bright sky behind the trees, I've learned with these 19th century-like, orthochromatic emulsions not to worry about the sky detail, as it will have to be grossly over-exposed in order to get adequate foreground tones.

There were a fair number of hikers out and about along the river that day, and I always wonder what they think about happening upon this primitive-looking kind of box camera, but done up in some shiny, mechanical appearance with its aluminum skin; an anachronism, perhaps. Luckily, I didn't ponder the thought too deeply, as I went further into the bosque in search of more images.
Posted by Joe V at 5:19 PM