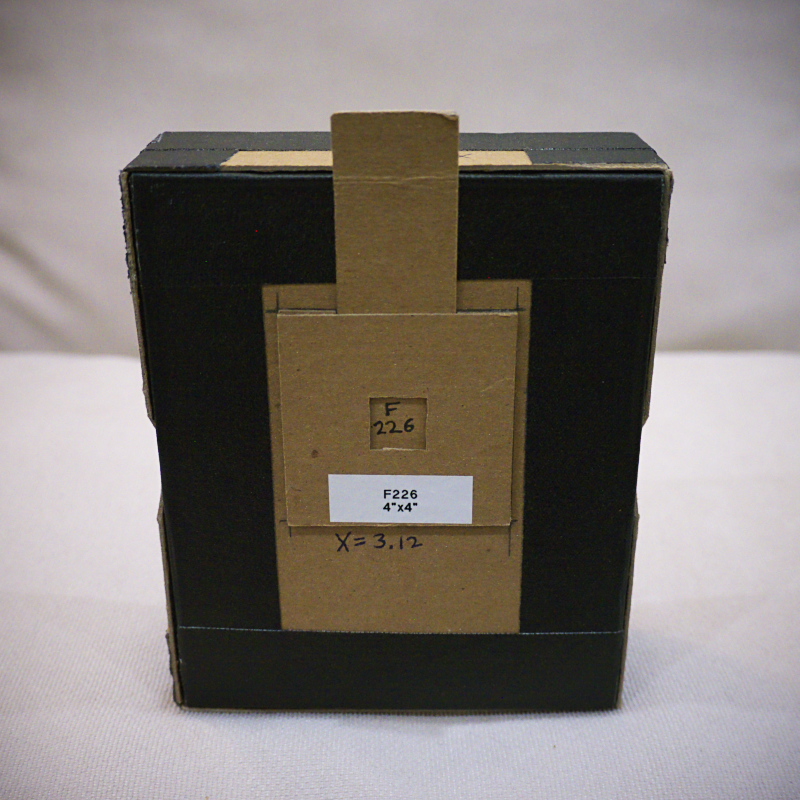 There was a time, several years ago, when I decided to make yet another pinhole camera, this one being a one-shot box camera made from "chipboard" cardboard (available in packs at Michael's crafts store) and gaffers tape. Using a paper size of 4"-by-5", and an image area of 3.5" square, its principal feature was a very wide angle of view. I had used this camera briefly, with paper negatives, then set it aside for a time.

Then last week I had a hankering to work again with this camera, only instead of using paper negatives I wanted to try Harman's Direct Positive paper, which I have been using extensively these last few months in other cameras, having arrived at a more accurate working exposure index and development methodology.

I created two images that day, exposed with my usual method of rating its ISO speed at 8 and metering the scene reflectively. I reference the exposure time on my meter opposite F/128, then multiply that by the camera's "X-value", marked on the front of the camera, that adjusts for the camera's true focal ratio, to arrive at the working exposure time. 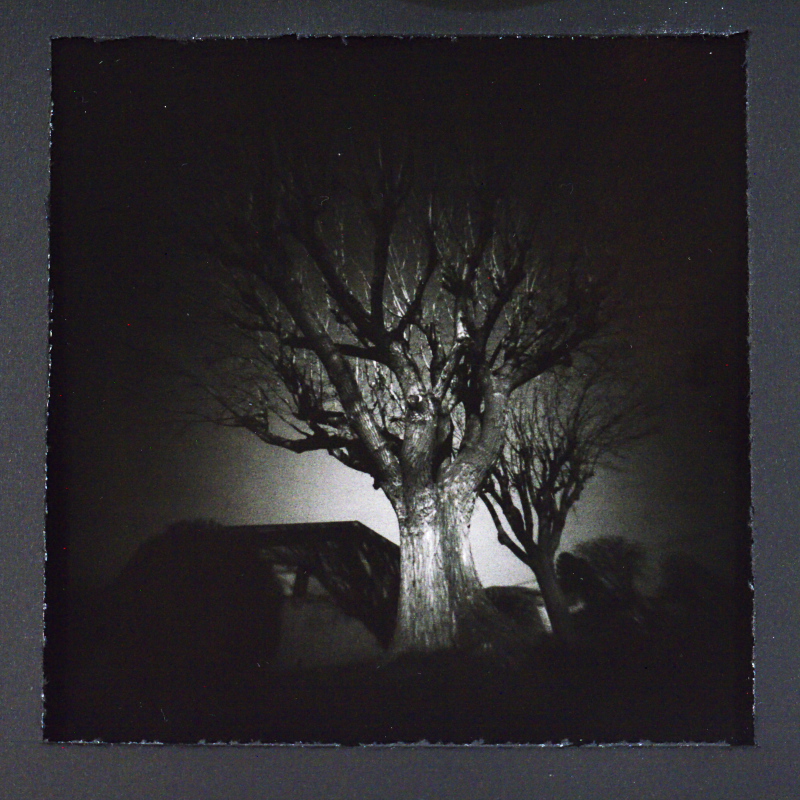 For this first image, of a tree in a front yard along a neighboring street, in the morning light, the meter indicated 15 seconds at F/128, while the actual exposure, taking into account the camera's actual focal ratio using the "X-value" multiplier, was 47 seconds. To make the setup small and convenient to carry, I didn't bring a regular tripod during this morning walk but rather just a tabletop mini-tripod, which I set on the ground in front of this tree, looking upward. I had to ensure that I stayed out of the way of the pinhole's field of view after sliding open the cardboard shutter, given the extra wide angle of view of this short camera. Metering was done against the brightly lit front part of the tree trunk.

Inspiration for this image was found that previous evening, during a stroll, when I noticed the stark, barren branches illuminated by the dim light of a street lamp. 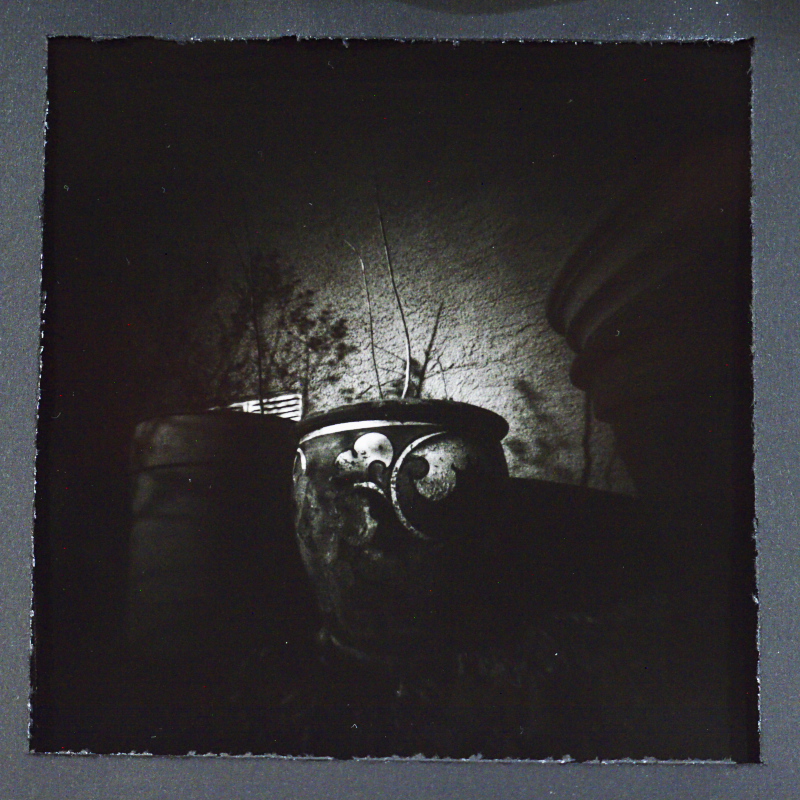 This next image was created after returning from this morning walk, of a pot near my front courtyard, again taken from a ground-level perspective, with the camera atop the mini-tripod. The meter indicated 10 seconds at F/128, while the actual exposure was 32 seconds.

Several aspects of these images interest me. For one, there's the extremely wide angle of view, causing the severe vignetting. I like the way that the central image area seems framed in a surrounding area of blackness. Also, the sky in the first image appears to be nicely dark in tone, rather than the usual blown-out whiteness when using orthochromatic paper media.

Both of these aspects are actually interrelated, since the reason for the relatively dark sky tones is because of the light falloff caused by that severe vignetting. Were the camera of a "normal" angle of view (where the focal length is about the same as the format size) there would be much less vignetting and light falloff toward the edges, resulting in a much more over-exposed sky.

This is an important point to consider when designing a pinhole camera for scenic photography that's intended to be employed using orthochromatic paper media. The severe light falloff caused by these short focal length, wide-angle cameras can serve to darken the edges and corners sufficiently to render the sky with a more pleasing, darker tone, more like what we'd expect using panchromatic film.

Of course, when doing so one must also accept the resulting severe foreshortening effect of such wide-angle optics, rendering objects even relatively near the camera rather diminutive in size, unless they are only inches away from the aperture.

It is possible to find a reasonable compromise with angle-of-view, that renders objects with a more normal perspective while still affecting some degree of light falloff sufficient to render a bit of sky detail visible. In my experience this occurs in angles of view somewhere in the range between 90 and 120 degrees. Some experimentation is required, for your individual needs. A handy rule of thumb is that a 90-degree angle-of-view occurs when the film or paper is twice as wide as the focal length.

These little 3.5" square prints will work very nicely when matted to a larger frame size, and I can see an entire series being presented in this manner. What makes this possible is the refinement in my process that I've worked toward, from camera to finished print via rotary processing of Harman Direct Positive paper.
Posted by Joe V at 11:39 PM