The Tangible Reality of Print in Hand 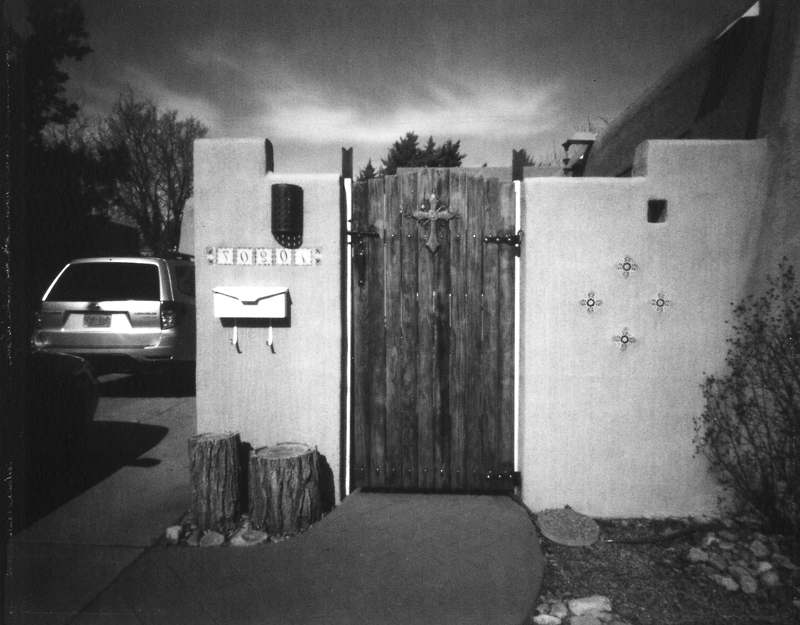 Having recently worked to refine my methodology for exposing and processing Harman Direct Positive paper, I've begun to create more pinhole camera-based, in-camera prints. This is after a long hiatus of a number of years, where the volume of my pinhole work was minuscule.

Part of the reason for this dry spell was that, at the time, I'd been working almost exclusively for over a decade with paper negatives - which don't directly produce a finished print - instead requiring either a contact print be made in my darkroom (a laborious process made impractical in the colder months of the year), or scanned to create positive digital image files.

It was this second process method, of scanning paper negatives, that I had mostly used, resulting in files to be posted and shared online, but still absent any physical print in hand.

Eventually, I left pinhole behind almost entirely and instead concentrated my creative energy mostly on digital camera-produced imagery; creatively satisfying but absent a real silver print in hand.

My initial experiments, a few years ago, using Harman positive paper in pinhole cameras involved larger sized formats, with longer focal lengths and the resulting larger focal ratios, which resulted in extended exposure times, even in bright sunlight, of well over a minute. For this reason I balked at continuing to use this paper in pinhole cameras, and ended up using it mainly with faster, lens-based cameras. 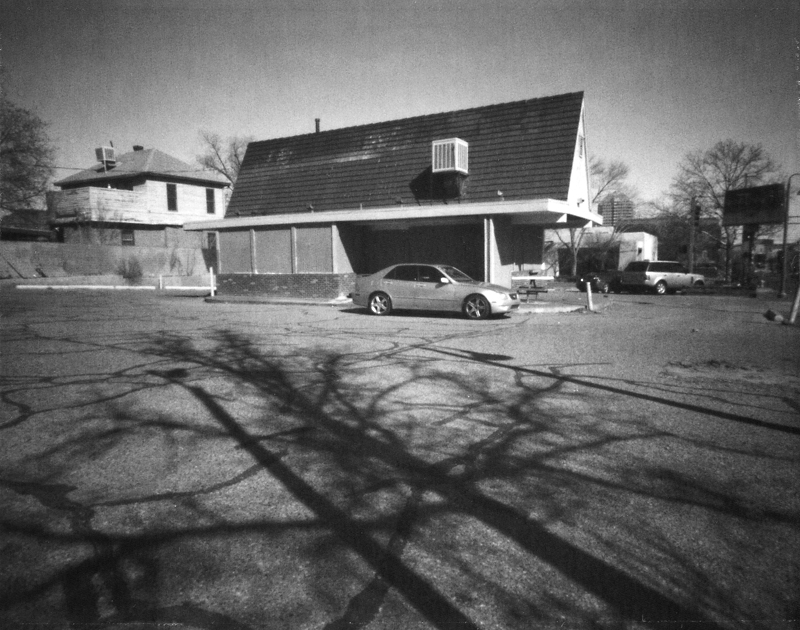 However, results from recent experiments with exposing small pieces of Harman paper in pinhole cameras with smaller focal ratios has suggested that successful direct in-camera pinhole prints can be easily made using reasonably short exposure times. Most notably was having made test exposures in the little 2"-by-2" brass pinhole plate camera. Its F/140 aperture was fast enough to warrant reasonably short exposure times in bright sun, inciting me into changing my mind about direct positive pinhole print work.

Now I've begun working more with a 4"-by-5" wooden pinhole box camera, with a focal ratio of F/285 - small enough of an aperture to render reasonably sharp prints while keeping the exposure times well under a minute.

Despite requiring a tripod mount and lengthy timed exposures, the focus-free nature of pinhole photography implies that alternative composing methods can by employed, enabling accurate framing while streamlining the image-making process, as compared to the more traditional large-format process, where the photographer tucks in under a dark-cloth, squinting into a view-screen with magnifying loupe in hand. The "viewing dots" on my pinhole box camera provide an accurate and convenient method of composing a scene, as an alternative to either the cumbersome large format methods or the questionable accuracy of mere point-and-guess aiming with box cameras absent any viewing system whatsoever.

In the previous article I discussed the merits of employing extremely wide angles of view with pinhole cameras using orthochromatic media like Harman Direct Positive paper, as a strategy for creating landscape images with a reasonably dark sky tone. While this 4"-by-5" camera has not nearly as wide of an angle of view as that cardboard box camera discussed previously, I'm still able to get skies rendered with a reasonable degree of tonal detail, while the exposure differences from center-to-edge are much less severe in light fall-off. 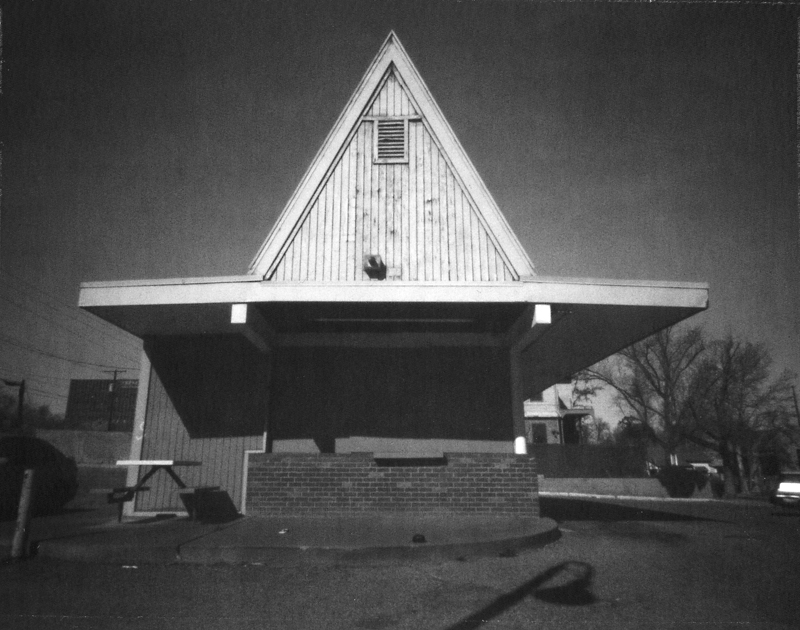 Holding these little prints in hand, they seem to be much sharper than their pinhole origins might otherwise suggest. One doesn't appreciate this as much with Internet-posted digital scans, however, since they don't hold up well to the closer scrutiny afforded by a larger computer monitor.

This reminds me that one of the greatest thing about creating these in-camera prints is their physical presence; the paper's thickness, texture and surface sheen; how one has to hold such a print close to oneself, an intimate interaction, an experience that remains lacking when merely simulated on a digital viewing screen.

So while IBM's Deep Blue A.I. might be able to best the world's Chess or Go champions, there's still nothing like holding a silver print in hand, an entirely non-Internet-based, physical experience.
Posted by Joe V at 5:42 PM